Who are you calling Geriatric? – Stop age shaming pregnant women

I have been meaning to write this blog for a while but every time I sit down to do it I just get too infuriated to think.

However, as usual, I have been inspired by one of my beautiful, empowered clients to take a deep breath and share my thoughts.

Tracie was confronted by a system that insisted on bombarding her with all her risk factors and why they would have to induce her because she dared to have a baby at the age of 40.

At first, Tracie was overwhelmed and almost bought into “risk” culture but then a little voice in her head said, “Hang on, I’ve already had 3 beautiful births, I think my body is pretty good at doing this”.

That is when she contacted me as she wanted to know she wasn’t crazy for thinking this and she also knew she needed to deal with the fears that had been put in her head.

So thank you, Tracie, for your inspiring story.

Let me start with the word “geriatric”.

When did it become ok to use this term for any pregnant woman over 35?

Google geriatric and this is what you get:

adjective
1. relating to old people, especially with regard to their healthcare.
“a geriatric hospital”
noun
1. an old person, especially one receiving special care.
“a rest home for geriatrics”

As a Hypnobirthing Australia™ Practitioner I  am very aware of how important language is and I implore everyone to stop using this term.

There is so much language that is used by obstetric services that are not only offensive but undermines women’s natural abilities and suggest “special care” is needed.

So care providers who insist on using demeaning, offensive, and disempowering language (or just as bad, medical terms you don’t understand) are clearly telling you where they think the power lies.

And even if 40 was  “geriatric”  those involved in aged care understand that a healthy 65 yr old has very different care needs to an unhealthy 65 years old.

Why do obstetric services now insist on lumping all women over 35 into the same basket?

When I dared to have my 4th baby at 38 years of age. I was presented with the risk factors which are mainly congenital abnormality, diabetes, and high blood pressure. When all of these were ruled out, no one mentioned my age again.

But now even if a woman over 35 gets to 38 weeks, has had 3 babies, doesn’t have diabetes, doesn’t have high blood pressure, and her baby is growing well she is still treated as high risk and constantly threatened with induction.

Why is there still an assumption that there is still a high risk of stillbirth for this mum?

We do have data saying that stillbirth risk increases with maternal age, but can we absolutely say that for all mums?

Is the problem age per se or is it the fact that as we get older we have had longer to develop health problems?

And why, oh why is it so hard to individualise care?

Why can’t obstetric services look at the woman in front of them and use clinical skills, the woman’s actual health status and her desires to achieve the best outcome possible??

Are they so scared of physiological birth that they always assume the women in front of them is the 1 in 100 of a potential risk not one of the 99 who will be absolutely fine???

Isn’t up to every individual woman to decide what risk she is prepared to take????

Anyway rather than read me ranting on about this, I have put some links for you to read at the bottom of this blog and here is Tracie’s story.

I know I need to read her story again to soothe me.

BTW she decided to birth with a Privately Practising Midwife who did have the knowledge, skills, and compassion to individualise her care.

Lucky for her because her labour wasn’t textbook and intervention definitely would have happened in an obstetric environment that insists all women’s bodies have to function in exactly the same way!!!

My big boy is finally here!

On New Year’s Eve at 4 pm I had a bloody show and surges soon after.

My midwife,  came around to check on me.

I organised the 3 smaller kids to go with grandparents and my best friend.

New Year’s Day, contractions started up again and were crampy throughout the day but inconsistent.

We went for a big walk that night along the river.

Almost at the stroke of midnight on the 2nd January my membranes released so I woke my husband.

I was having a dream that we were going to a Mariah Carey concert in a bus and I was going to pay for our tickets using broccoli. I don’t like broccoli and he hates Mariah Carey so I couldn’t stop laughing when I was telling him about it.

Surges started about an hour later and got progressively more intense.

I put Surge of the Sea on and bounced on the fitball.

Then, around 4 am, they stopped AGAIN.

I fell asleep and woke up at 7 with some intense pressure in my pelvis.

Back on the fitball to try to get things to progress, then by 8, they were all but gone.

I was getting so frustrated.

I went shopping and came home at around 10.

At 11, surges started again and were full on almost straight away, I was sitting on the fitball with my head on my bed.

Hubby put Netflix on and we watched that while he timed each surge.

They were 20 minutes apart.

By 1, I asked my husband to run a bath, surges were now 6 minutes apart and it was taking a lot to get through each one.

We put on Tranquil Chambers and some clary sage in the diffuser, at 1:40 I had one huge surge that made me come so close to panicking.

I said to my husband that I had changed my mind and I couldn’t do it.

I was on all 4’s crying for about 15 seconds before I realised he wasn’t even in the bathroom with me lol.

He was filling up the pool, so I told myself to get it together and went to my room, back on the ball and waited for my midwife, I just knew hubby would have called her.

She arrived about 10 minutes later and got me straight in the pool.

I had Surge of the Sea and Affirmations going on repeat on my headphones, I completely blocked out everything around me.

I didn’t realise the backup midwife had arrived.

The two older kids were in and out of the room.

Hubby was telling me to breathe baby down which I did for a few surges but I could tell I was going to have to put some extra grunt into it.

I was holding hubby’s hands and squeezing so hard while my midwife applied counter pressure to my lower back.

I said to her “how much longer” and she was so good, saying “you’re doing great, keep going”.

No wonder he took his time, he was preparing me!

I know that without hypnobirthing I would have been so worried about things not progressing over those 2 days.

There is no way I could have gotten through that transition stage without it.

I felt like I was breathing for Australia and although I made a few pretty primal sounds while he was crowning I was so proud of how well me, my husband and our beautiful baby handled it all.

Thank you for your confidence in me! 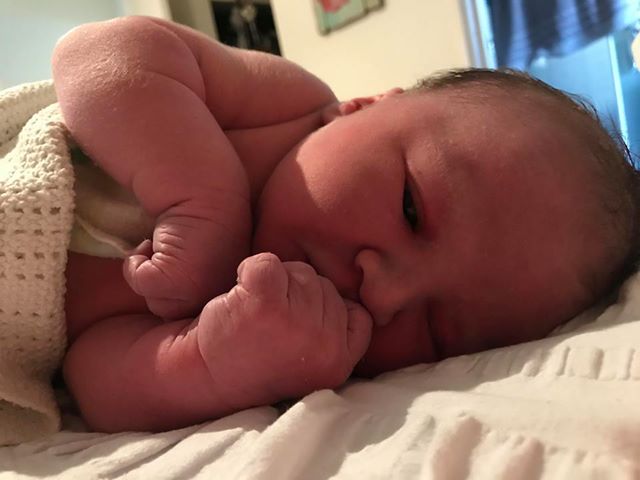 Please, read these if you have been called a geriatric mum and your care provider is recommending induction!

Remember to weigh up ALL the risks and benefits in your unique situation.

A bit of good news for older mums…

Advanced maternal age and adverse perinatal outcome: A review of the evidence

The whole 9 months – what happens when babies are born before they are due?

Should every mother be induced at 39 weeks? The ARRIVE trial

Ten things I wish every woman knew about induction of labour