Sarah attended her sister’s hypnobirthing as a support person.

She also happens to be a midwife.

This is her story:

When Liz first told me that she was planning on going to a hypnobirthing class I was surprised, as it did not really seem like something she would do.

Liz explained that she wanted to do it because the meditation and relaxation would hopefully help with her anxiety and if the hypnobirthing was going to help with that then I was completely on board. I was proud of her, for researching her options for childbirth and becoming informed about her pregnancy and birth.

I was still sceptical of the calm, pain-free hypnobirth but was open-minded and as midwife excited to learn more.

It was great that Pip allowed me to come to the classes as a second support person.  It was important that I understood how Liz and Andy wanted to use the hypnobirthing techniques so I could support them the best I could.

The classes were really good and I liked the premise of breaking down the fear birth.

The folder and hypnobirthing CDs was a fantastic little take home part that I always encouraged Liz to read and listen to whenever she was feeling stressed.  I think this is the most important part of the process, for the women to be able to practice all the hypnobirthing techniques they learned in class, to practice these with her partner and find the ones that worked the best for them.

I liked the techniques that we learnt in the class and was looking forward to seeing how they would work during labour.

Towards the end of Liz’s pregnancy, it was becoming clear that things were possibly not going to go according to plan.  After every obstetrician or midwife visit, Liz would go back to her hypnobirthing tracks and it would realign her birthing goals and would enhance a positive frame of mind.

After the stress of the last few appointments and being admitted to hospital in her last week of pregnancy, I was really proud at how she was coping and how by remaining calm, all the calming hormones were going to the baby as well.

When the probability of a caesarean section was becoming a reality, it was comforting to know that hypnobirthing also catered for a positive caesarean section experience.  Liz being able to contact Pip to get some more advice and be able to download the positive caesarean tracks I believe allowed Liz to have much more positive outlook, and helped her to write and prepare her caesarean preferences and for her to understand that no matter which way this baby was going to come out that she was going to have positive hypnobirthing experience.

Having an understanding of the private system and having seen many caesarean sections, I was worried that all of Liz’s preferences were not going to be met and I was worried that the clinical nature of the theatre room was going to have an impact on how Liz would cope.

Being able to listen to her hypnobirthing tracks and being able to do light touch massage (since learning it effects in the classes!) I believe were the only things that allowed her to stay calm throughout the whole experience.  There were a few moments where I was worried Liz would lose her focus and my only concern was ensuring that the spinal block went in well and that there was no need for a general anaesthetic. Of course, the spinal block was the part that took the longest and needed two goes to get in.  Once the spinal was in and working I was happy.

Liz was calm and deep in meditation, which was fantastic. 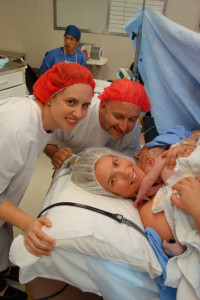 It is a very scary and vulnerable place to be in, with no control over your body and what is going on. What Liz could control was her mind and her focus and that is exactly what she did with the help of hypnobirthing.

It was an amazing experience to see Liz watch George being born after the drapes were dropped and have him placed on Liz’s chest. All I remember was her saying  ‘this is weird’.  George was born calmly with a little cry to fill his lungs and a warm cuddle from his mum and dad.

Looking back I know hypnobirthing was the best choice Liz made regarding how she was going to birth her baby and how she and Andy were going to stay calm during the delivery.

George was born the calmest I have seen after a caesarean and is still a calm beautiful baby, feeding and sleeping well, and this I believe is the real benefit of hypnobirthing.

I have yet to see hypnobirthing in action for a vaginal birth but look forward to the chance to do so one day.  For anyone who is fully committed to the process and wants a positive, calm, fear-free birth – then hypnobirthing is a great way to go.